This plugin written by @vigoux tightly integrates the fzy search engine into neovim, to provide a fast and simple UI for fuzzy searching. It is very much looking for testers and help to add more features ! 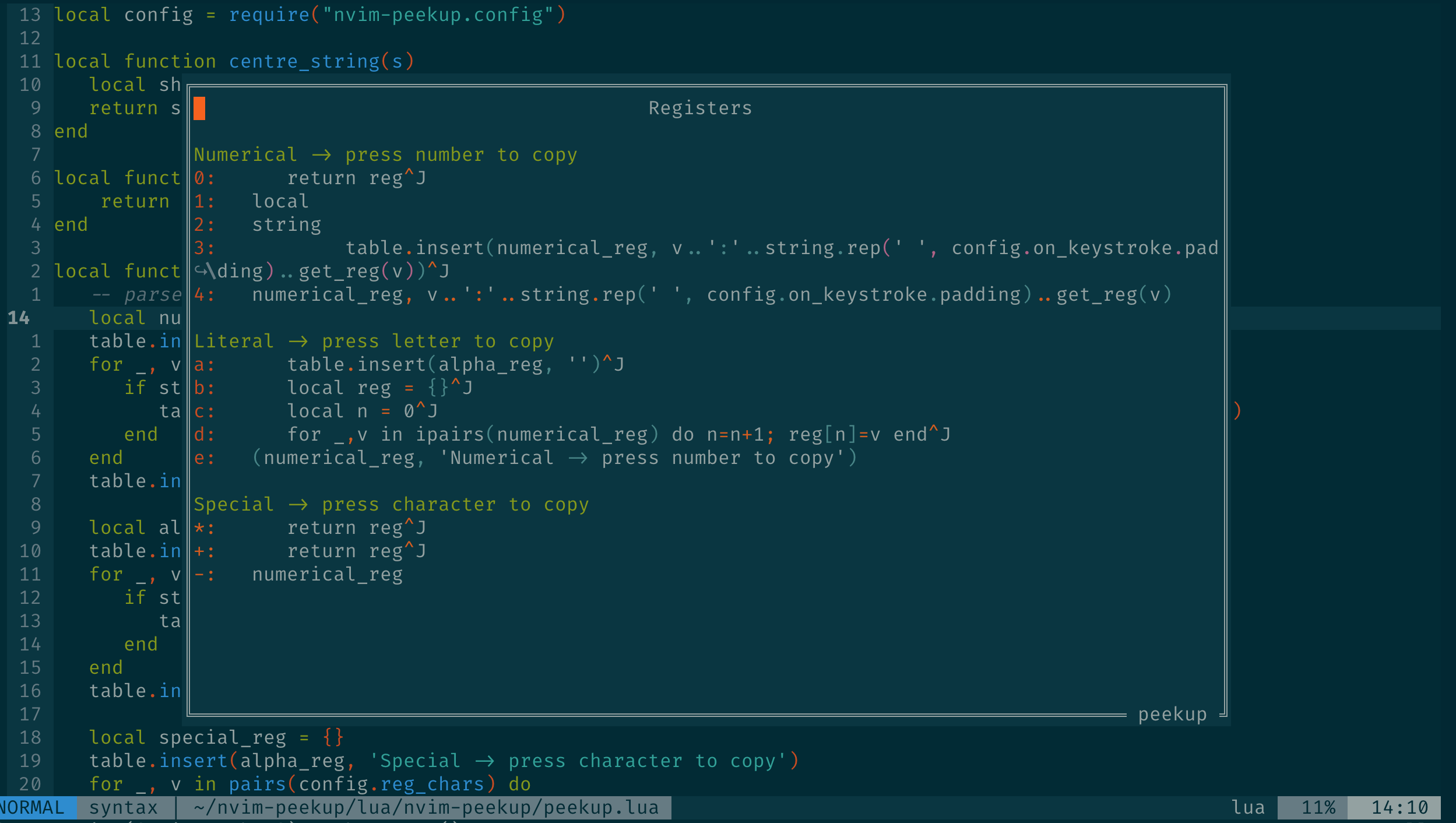 nvim-peekup lets you dynamically interact with Neovim registers via floating windows, with visual selections that help you identify the register to copy - plus some other goodies. A plugin by @gennaro-tedesco.

A new plugin by @uga-rosa. The plugin is a similar plugin to all color pickers plugin, but it has some nice evolutions, such as supporting multiple colorspaces. Serious work here, congrats!

There are some plugins that don’t go unnoticed. SmoothCursor.nvim is when of them. The plugin adds a visual hint to show the scroll direction. By @gen740.

Another great plugin from @anuvyklack. This one can automatically manage width of current window… with animations!

So how about playing chess… but inside Neovim itself? If this sounds interesting, check out this new plugin by @luk400. You can play Rapid or Classical games (8min and above) and set the time control, increment, variant, rating range and whether to play rated/unrated.

Neovim plugin to collect and view information on battery power in your status line.

@justinhj updated battery.nvim, a pure lua battery status bar plugin, to v0.4.0 with the following improvements since the initial release:

You can use branch v0.4.0 explicitly in your plugin manager or update to the latest main branch.

A small plugin allowing to edit injected language trees with correct filetype in a floating window. This allows you to use all of your config for your favorite language.

FeMaco now supports language injections in any language (including inline).

The plugin now supports a command-palette-like feature and allows users to specify custom actions and options.

A high-performance color highlighter for Neovim which has no external dependencies! Written in Luajit.

The plugin now has support for SASS variables and imports, and Tailwind colors, a CSS LSP.

This is an update gathering the release of two versions of the plugin: v0.2 and v0.3.

A huge update, then!

The :%s command substitutes text in your current buffer. For instance, :%s/have/had/g substitutes the word have by had everywhere in your buffer. The g modifier makes it so that if you have have twice on the same line, both words will be modified — omitting g will only replace the first occurrence on each line. You can also use c as an extra modifier to be prompted with a replace confirmation for each occurrence.

Now, something that people might not know. Imagine you have the following buffer:

And you want to replace all of the 32 arguments to functions by 100, but you don’t want to replace couple of 32 declarations at the top of the buffer and at the end. A way to do that would be to use :%s/32/100/gc and confirm only when replacing 32 inside the functions arguments. But that’s not very practical. A better way is to use visual mode commands! Select all the lines starting from let x = … to let b = … and press :. You can then enter the substitute command to scope it to that selection; remember: % means the whole file; here, your command line will look like something like :'<,'>, which are visual marks (don’t change them!). So the substitute command will look like this:

And that’s all! You can see that the replacement was limited to the portion of text you selected. That works in visual, line and block visual modes, so have fun replacing things!

:h s_flags for more information about the substitute flags.